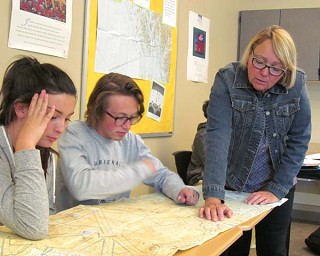 The sky is the limit for students in Sheryl Yeager’s classes at Sisters High School (SHS).

That’s because she teaches two sections of Flight Science, and the 50 students who are enrolled could be well on their way to having a pilot’s license by next spring.

“It’s not very common,” Yeager said. “I didn’t even know anything like this existed.”

She worked as a substitute teacher at SHS and other Central Oregon schools last year. When Sisters School District advertised for a flight instructor, Yeager had all the credentials – including an appropriately famous last name.

She’d had a pilot’s license since 1999, was a certificated Oregon teacher, and she lived locally. Her takeoff as a full-time Outlaw instructor fell neatly into place beginning this month.

“I was in shock,” said Yeager, a 23-year teaching veteran.

Last week, one of her classes spent an hour learning about the flight world’s acronyms, and studying visual flight rule section charts showing detailed terrain the way a hiking map would.

Yeager strolled from desk to desk monitoring students’ work. She leaned over and pointed to one detail on a boy’s chart, saying, “In the middle of nowhere, that would be a really good visual aid.”

Her students have a variety of reasons for taking Flight Science. Delsie McCrystal, a freshman, said it “would be cool” to have a pilot’s license, adding that she knows people who own airplanes.

Her friend, freshman Sydney Hummel, simply thought it would be an interesting class. But Luka Perle, a sophomore, said he hopes to have a flight-related career. Perle always is taking flight lessons at Sisters Airport and said, “I thought this class would help with that.”

Sophomore May St. Clair isn’t sure she’ll go for a license, but is taking the class because it’s a good opportunity. “A lot of schools don’t have this class,” she said.

Principal Joe Hosang agreed it’s unusual. It began, in part, from another teacher’s interest in flight and the contacts he had at the local airport, Hosang said.

The principal hopes that flight students eventually can get college credit from Central Oregon Community College that will help them toward a license.

During a class, Yeager held a model airplane aloft to demonstrate three important principles of flight -roll, pitch and yaw.

“It’s a combination of all three of those that allows the airplane to turn,” she said.

For students who have the interest, Yeager said, the Young Eagle program also run through Sisters High can lead to scholarships that pay for ground-instruction costs. By the end of the school year, students should be prepared to take the private pilot’s knowledge test which is the first step toward a license, Yeager

She described the course as a work in progress, but said everyone is working together to make it a valuable experience. Students will get to ride along soon on a flight from Sisters Eagle Airport as part of the course.

While there’s some math involved in the instruction, plus the onslaught of all those flight acronyms, Yeager’s classroom also hints at the romance of flight.

A photo of Amelia Earhart is posted on the classroom wall, with a quote from her: “You haven’t seen a tree until you’ve seen its shadow from the sky.”